A new addition to the Hamilton Southeast Schools student manual deals with microaggression without punishing students who violate it. Instead, the new language is designed to facilitate conversations between students and administrators, teachers, or guidance counselors about why what was said might cause harm.

The addition defines microaggressions as intentional or unintentional indirect discrimination against people from marginalized groups. The new language in the manual has been mostly accepted by members of the HSE community, but some people disagree with the new wording and have expressed their displeasure on social media platforms.

The manual states: “Microaggressions can be defined as everyday, subtle, intentional or unintentional interactions or behaviors that communicate some kind of prejudice towards stigmatized or culturally or historically marginalized groups. While Hamilton Southeastern understands that individuals who communicate microaggression may not have intended to express bias, the school recognizes the responsibility to educate students about the reality of perceptions of bias. Issues regarding microaggressions can be resolved through restorative conversations led by school administration, teachers, and/or guidance counselors rather than punitive measures. Habitual occurrences could result in consequences applicable to inappropriate conduct as defined in Section 28.” 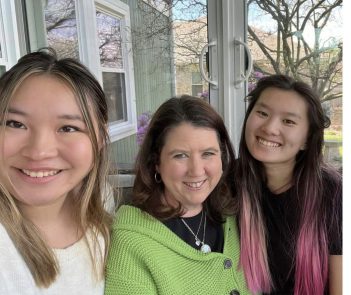 One parent supporting the new addition is Bethann Buddenbaum, mother of two Hamilton Southeastern High School graduates. She said her two daughters, whom she and her husband adopted from China, are often “treated as white” when they are with their white parents. However, when they are alone, they are “treated like Asians”.

His daughters, Fiona and Emma Reese, graduated from Hamilton Southeastern in 2017 and 2020, respectively. Buddenbaum said her two daughters suffered microaggressions while attending the HSE. She said while some interactions were intentionally mean, like asking if they liked to eat dog or cat, other instances were unintentional, like being asked about China’s one-child policy because she was the only one. Asian person in the class.

Buddenbaum said she’s glad the school addresses microaggressions in the new textbook and noted that social media backlash was unnecessary.

“The manufactured anger about this addition to the manual is disappointing, to say the least. It demonstrates a lack of empathy for others, which includes race, gender, sexual orientation and disability,” Buddenbaum said. “And that’s exactly what this addition to the student manual seeks to do – help students understand that words matter.”

HSE released a statement saying it strives to prepare its 21,000 students both academically and behaviorally, but would not comment beyond the statement, which reads:

“We believe in ensuring our students are prepared for the ever-changing real world. and how to navigate successfully in this new environment in which we all evolve. The recent update to our student handbook provides staff with the opportunity to have restorative conversations about how an intentional or unintentional interaction that communicates some kind of bias between students can be effectively addressed.

One person who does not support the new language is Diane Eaton, a community member who sat on the HSE school board from 2006 to 2014. She said the board should make decisions based on facts, and the school had no fact or statistic to justify updating the manual.

School board member Michelle Fullhart, who has served on the board since 2015, supported the new wording when it was presented to the board. Although she declined to comment directly on Current, she provided a statement from her personal Facebook page.

The updated manual was approved at a June 8 school board meeting and went into effect August 5 at the start of the school year.