– “The Mandalorian“, an eight-issue adaptation of the first season of the Disney+ show, scripted by Rodney Barnes (“Killadelphia”) with illustrations by Georges Jeanty (“Buffy the Vampire Slayer”). Each issue will adapt one episode, giving fans “a chance to experience the events and characters of Season 1 in a whole new way.” Issue 1 will feature a main cover by Adi Granov (“Iron Man,” “Star Wars: Darth Vader”).

– “Clobberin’ time“, a Thing team comic written and drawn by Steve Skroce (The matrix, “We are on our guard”). The book marks Skroce’s first insider work on a Marvel comic since 2000’s “Wolverine.” Each five-part chapter will pair Ben Grimm with a different hero, namely Hulk, Logan, Doctor Strange, Doctor Doom, and Silver Surfer. . The main villain will be a new character named Ogdu Fraize, the Psychopomp, a human from a post-apocalyptic future, who Skroce says “has an ax to grind with the heroes who left behind his brutal world of haves and have-nots.” destitute.”

– “Fortnite x Marvel: Zero War“, a five-issue crossover with the hit video game, written by Christos Gage (“Avengers Academy”) and Epic Games CCO Donald Mustard, with art by Sergio Davíla (“Captain Marvel”). The comic will see Spider- Man, Wolverine, Iron Man, Shuri and other heroes moved to the game’s mysterious island, where they will be forced to find the Zero Shard to return home Issue #1 will be released with a main cover by Leinil Francis Yu and a Redeemable code to unlock a free in-game cosmetic. 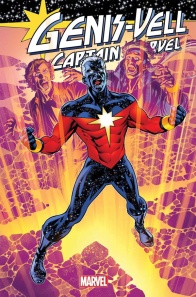 – “Genis-Vell: Captain Marvel“, a five-issue series featuring the character’s recent return to the pages of “Captain Marvel.” The synopsis reads, “Now back in the land of the living, Genis-Vell and Rick Jones are set to Topple! Can Rick Jones save Genis – and himself – before they both disappear? Is Rick’s ex-wife Marlo the key? Find out in this surprising saga which will chart a new course through the Marvel Universe for Genis, Rick and many others! It will be written by Peter David, who wrote the adventures of the characters in the 2000s, and will be illustrated by Juanan Ramírez (“Darkhawk” ).

– Last but not least, writer Jed MacKay and artist Pere Pérez will team up on “iron cata five-part episode that will see Felicia Hardy and Iron Man investigate the reappearance of the Iron Cat armor. The suit, which was introduced during MacKay and CF Villa’s “Black Cat” run, was created by Felicia after she slipped into Tony Stark’s lab. “There’s someone new in the Iron Cat armor,” the synopsis says, “and they’ve got a plan that will put them in the crosshairs of every hero in the Marvel Universe. Secrets and Mistakes Iron Man and Black Cat are going to come back to haunt them, and it’s going to get RAW!”

Head to the links to learn more about all the comics. Marvel’s full June solicitations, which also currently include “Wild Cards: The Drawing of Cards,” Al Ewing and Tom Reilly’s “Ant-Man,” and a “Moon Girl” team title, will be released on a date. later.