Gachagua blames the nation for publishing a bad report

Gachagua blasted the article which reported that the Kiems kit failed to validate his biometrics at Sagana Primary School on Tuesday morning August 9.

In a statement released after voting at the polls, incumbent Mathira said a plot had been hatched several years ago to orchestrate his downfall.

“Nation media, you have been carrying out a defamation campaign with Kinoti for 3 years! Even though I voted in the media spotlight, you are spreading a false narrative that I was manually tagged.

“How far can you fall? You have stooped to the level of the gutter press and yellow journalism,” his statement read.

Gachagua was accompanied by his family members, including his wife Gloria Gachagua and Gathoni Njoroge Mwai, a 91-year-old family friend.

However, it was momentarily delayed after the Kiems kit suffered technical issues. Gachagua, however, took the vote a few minutes later.

He commended the Independent Electoral and Boundaries Commission (IEBC) team led by Wafula Chebukati for conducting a well-organized electoral process.

Meanwhile, the failures of the Kiems kit were seen in several polling stations across the country.

Speaking in Kakamega County, Wajackoyah said he was disappointed with the IEBC, wondering why the system had failed in one of its key areas.

“What are these people afraid of? Why couldn’t they test the kits? Does this mean that if I don’t vote, the votes will be counted? I’m not really happy but what can I say?

I was supposed to be home this afternoon. My people are deprived of their rights. The older generation has gone home,” Wajackoyah lamented.

The IEBC also temporarily suspended voting at the polling station at Farasi Lane Primary School. Nairobi Women’s representative Esther Passaris was turned away and asked to return later as the IEBC rushed to resolve the challenges occasioned by the failures of the Kiems kit. 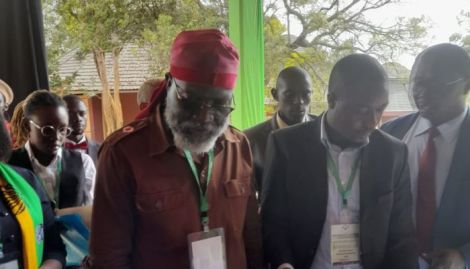 George Wajackoyah at a Kakamega County polling station on August 9, 2022